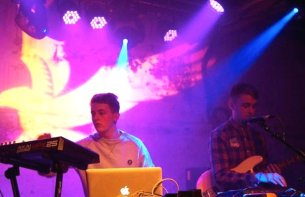 Most experienced songwriters recognize the importance of keeping each new song sounding fresh and different by creating plenty of variety in their chord progressions. They’re aware of the danger of writing songs that are all built around the same few notes, chords and keys—a criticism that is often leveled at electronic dance music (EDM).

Now, leading British electronic dance duo Disclosure—consisting of brothers Howard and Guy Lawrence—are aiming to change all that. Their mission, they say, is to bring greater depth to EDM by using song structures, writing processes and a wider range of chords that aren’t usually found in this genre.

“We’re trying to bring class and soul into the songwriting … using jazz chords that have emotion instead of boring, stabby EDM triads,” Howard Lawrence recently told Billboard magazine. “You can play [our song] ‘Latch’ in a massive nightclub or cover it in a jazz ensemble.”

His brother Guy Lawrence added: “There are acoustic guitar covers of [our song] ‘White Noise’ on YouTube. You can’t do that with your average house tune. The only thing that makes it dance music are the beats.”

Disclosure’s music is seen as a synthesis of house, pop and UK garage, with a strong emphasis on traditional song structure (their influences surprisingly include singer-songwriters Stevie Wonder, Peter Gabriel and Kate Bush).

“Our songs often feature a fat layer of choruses and verses instead of a big build up, a drop and a big pyro explosion usually found in EDM,” said Guy. “It’s more about the meaning of the song, the structure … it’s a little deeper.”

Disclosure may be breaking new ground in the EDM market, but they’re not the first to discover that you can enhance the feel of a song by using so-called ‘jazz chords’, such as thirds, fifths, sevenths, ninths, elevenths or thirteenths.

In the 1920s, the great George Gershwin reshaped popular music by taking jazz elements and certain harmonies and combining them with Tin Pan Alley pop in a way that hadn’t been done before.

In the modern era, ‘jazz chords’ such as ninths, elevenths and thirteenths are featured prominently in songs like Billy Joel’s ‘Just the Way You Are’, ‘Ebony and Ivory’ by Paul McCartney and Stevie Wonder, and Mariah Carey’s ‘Love Takes Time’.

Carole King’s classic song ‘I Feel the Earth Move’ even uses elevenths in a minor key!

Paul McCartney’s ‘Yesterday’—one of the most covered songs of all time—is a great example of how to make a simple tune harmonically interesting. The song doesn’t just feature ordinary majors, minors and sevenths; it also includes a mixture of fifths, thirds and seconds, and a couple of well-chosen variant chords.

“Even if chords are simple, they should rub,” says songwriting legend Jimmy Webb. “They should have dissonances in them.”

He adds: “I’ve always used a lot of alternate bass lines, suspensions, widely spaced voicings, and different textures to get very warm chords. Sometimes you set up strange chords by placing a chord in front of it that’s going to set it off like a diamond in a gold band.”