American singer-songwriter and award-winning country star Brad Paisley believes songwriters should always think of the images their words will create in listeners’ minds when they’re working on new songs and writing lyrics.

“My idea of country music is always about the pictures it paints for you,” triple Grammy Award winner Paisley recently told ABC News Radio. “I don’t like songs that don’t give me images in my mind.”

Paisley—who has sold over 12 million albums and has won 28 country music awards—says the same ‘visual’ approach to songwriting should also be applied to pop and rock songs. He points to The Eagles’ ‘Hotel California’ as a great example. “I don’t know totally what that song’s about, but you know, ‘On a dark desert highway’, you know, it’s just…you see everything they’re sayin’.”

Choosing words that paint a picture in the listener’s imagination is also important because it will enable you to reach him or her on an emotional level … and make them feel what you’re feeling.

This aspect of the craft of successful songwriting is a major challenge because you have to skilfully use powerful devices such as metaphor, simile, personification and rhyme within the constraints of a clearly defined song structure and rhythm. And you only have three minutes or so in which to get some vivid colours onto your lyrical canvas to captivate the listener.

That’s why many top writers’ lyrical language is often simpler and more down to earth—with short descriptive phrases that are easily understood and can therefore immediately connect with the listener. 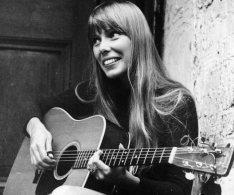 Joni Mitchell is another singer-songwriter who has always taken a highly visual approach to songwriting: “My style of songwriting is influenced by cinema,” she once remarked. “I’m a frustrated filmmaker… It’s very visual. You’re scoring the actress, but the actress is singing the lines and trying to get them as conversational as film.”

Joni added: “A fan once said to me, ‘Girl, you make me see pictures in my head!’ and I took that as a great compliment. That’s exactly my intention.”

Read a FREE sample of the book HERE (USA) and HERE (UK & Europe).